Roses take care of themselves.

That’s what I used to tell people who admired my garden. After growing these classic flowers for 17 years, I’ve stopped saying it.

As it turns out, roses do need a helping hand to reach and maintain their full, beautiful potential.

Years ago in Portland, I watched our next-door neighbor prune his roses to the crown every fall. Every spring they came back with vigor. Perhaps I should have taken the hint but, when I began to grow roses myself, I didn’t want to start over every year. I wanted my roses to grow tall and lush and fill our backyard with color and fragrance. To that end, I shunned heavy pruning in favor of trimming off dead wood.

This year I noticed that some of my biggest bushes generated very few blooms. Most notably, my Peace rose managed only half a dozen flowers. Its descendant, Love and Peace, struggled to produce two.

When I went hunting for reasons, neglect turned up as the likely culprit. I’ve always known that roses need air circulation. That’s why there’s plenty of room around mine. What I missed was the need for air circulation inside them.

So this week I’ve been pruning with newfound passion. I looked for old wood and for canes rubbing against each other. I created space inside the bushes by trimming in a vase shape as experts recommend. In some cases, I also pruned for height. I ended up with a truckload of debris and a joyful heart.

I won’t see the end result of my effort until next spring, but I’m confident I did the right thing. I’m sure of this not only because of the research I’ve done about roses, but because of all the relatable experiences that crossed my mind while pruning.

In every aspect of life, allowing things to get out of control brings adverse consequences. Some variation on pruning is almost always the first, most logical response.

Suppose you accumulate too much debt? Something has to give in order to pay it off. Most people go straight to their budget and start cutting discretionary expenses.

Suppose you’ve accumulated so many things that your home has become a cluttered mess? When you tire of it, you’ll likely go through the house sorting things into keep, sell, throw-away, and give-away piles.

Pruning is a must in large-scale problems, too. Plastic languishing in landfills? Reject plastic bags and take reusable ones to the grocery store. Man-made carbon upsetting the balance of nature? Reduce the emissions from fossil fuels.

Virtually everything we do in the garden and in life requires us to build and prune, rebuild and prune again. What I’ve learned this summer is that we shouldn’t be afraid to do it … and do it with the joy that comes in knowing you’re doing the right thing.

(Check with your local nursery or chapter of the American Rose Society to learn about recommended pruning times in your planting zone. Heavy fall pruning is not standard in most areas where freezing winter temperatures are common. In fact, it is not typically recommended where I live, but this year I felt the benefits outweighed the risks in my garden.)

The joy of gardening is all in your head.

That is never more true than at this time of year when spring is struggling to keep the calendar’s promise. Mother Nature teases us with scattered days of pleasantries, abruptly disappoints us with stormy behavior, and repeatedly threatens to give us the dreaded cold shoulder.

By the time she finally warms up to our adoration, most gardeners have already worked through the entire growing season in their heads. I, for one, do more gardening while sitting by the window sipping warm coffee than I ever do outside.

Even as I write this, I’m mulling over the idea of planting a climbing rose in a small splash of bare earth by the front walk. I’m contemplating how to elevate the grotto in my secret garden so I don’t aggravate my aging knees every spring clearing winter debris from the rocks. And I’m considering whether to trim a creeping juniper away from a footpath or drape the spears over a low barrier.

Once I get to these tasks, sweat will sting my eyes and underused muscles will scream. But the hard work – the creative process that gives my brain cells a run for their money – will be far behind me.

This process is likely to be just as familiar if you’re a dancer, an artist, a musician or a “creative type” in any discipline. Just replace the word “gardening” in my opening line with anything you happen to fancy.

As a writer, it’s actually a required step in our secret playbook. Whether I’m composing a blog, an article or a book, I spend hours in thought before I ever sit down at my computer.

Recently I watched Emma Thompson in Saving Mr. Banks and, for me, the best moment of the film came in the first 15 minutes. The ever disagreeable Mary Poppins’ author, P.L. Travers, wasn’t even plotting a storyline when she turned away from her frustrated visitor, looked out a window, and tested a metaphor to describe the pink blossoms on a flowering tree.

I’m fairly certain most of the family watching the film with me wouldn’t even remember that line, let alone be affected by it. I, however, can’t forget it. I’m forever hunting the same kind of metaphors.

Do the purple flowers dripping from the branches of our locust tree look more like clusters of grapes or kaleidoscopes of butterflies?

In the spirit of dynamic retirement, my experience with the creative process is playing out in yet another arena. In the last six months, I’ve spent a good amount of time thinking about taking up watercolor à la Georgia O’Keefe or impressionist painting in the style of Claude Monet – and no time at all actual trying either one. While I might be tempted to beat myself up for such willful procrastination, I choose instead to see this time as the prelude to a new kind of rapture.

Like gardening and writing, the joy of it is all in my head. 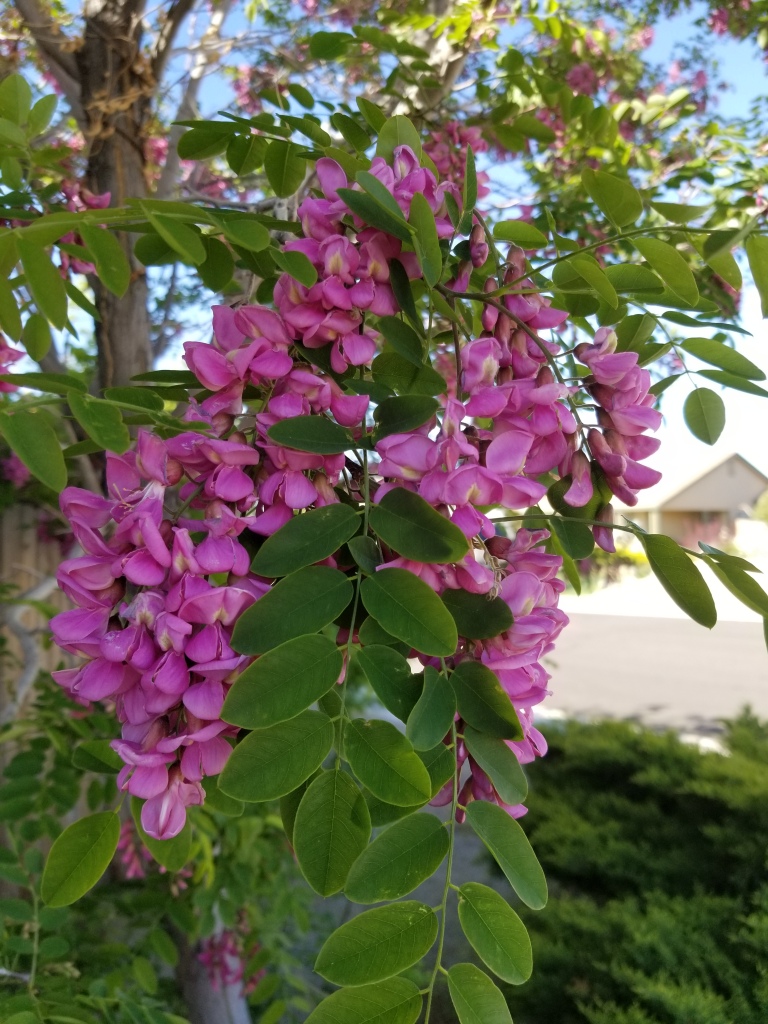 I didn’t have to plant a rose garden to understand why my favorite time of year has always been spring.

Like a welcome friend, it arrives about a week before my birthday. In its open hands are the gifts of warmth and beauty. And as the days of the season progress, the gifts only grow more glorious.

I’ve never met a single soul that doesn’t drink it up; not even if they vow their favorite season is summer, autumn or winter.

And that’s as it should be.

After all, every season has its splendors. Summer’s long days of emerald grandeur melt into autumn’s dazzling display of flaming hues, which gives way to winter snow sparkling in silvery moonlight. There isn’t a month of the year that lacks some redeeming majesty.

And yet, every season also harbors potential calamities. Gentle spring rains can become downpours that produce flash floods. Balmy summer temperatures sometimes escalate into oppressive heat that dries out the landscape and intensifies wildfires. Autumn and winter winds may usher in crushing storms and murderous frost.

We are obliged to experience it all. The rapturous delight and the depths of dreadfulness. The sweetly sublime and the supremely sad.

As I write this, my rosebushes are wearing dreary shades of ginger while they stand stoically in heaps of dark gray mulch. The air is sharp. Nothing is stirring except the occasional desert rabbit. Spring seems a lifetime away.

It would be easy to slip into melancholy about the state of the garden or worry whether all of my rosebushes will survive to bloom again. Neither response would be of much use against the ebb and flow of nature.

Rather, I will regard the shades of ginger like comfy flannel pajamas, the gray mulch like a woolen blanket, and the stillness like a peaceful night that invites pleasant dreams. I will replace worry with awe at the wisdom of the ultimate Spirit and the living Earth. I will rest assured that the endless Universe knows what we need and when we need it.

If my words seem more soulful than usual, it’s because the Universe is busy teaching me and mine a divine lesson. The class has only just begun, so I haven’t much to say specifically about it. That day will come. In the meantime, I will roundup my musings with these thoughts.

Every season has its purpose. I’m hardly the first writer to utter those words, and I surely won’t be the last. It’s a truth that dates to the beginning of time, and it will go on being true until the end of time.

Somewhere in the middle of that breathtaking beginning and evolutionary end, it’s up to us to find the meaning and the joy in each new day – no matter whether it seems sweetly sublime or supremely sad – and grow with it.

If the garden can do this from season to season, so can we all. Indeed, like roses in springtime, it is our destiny.